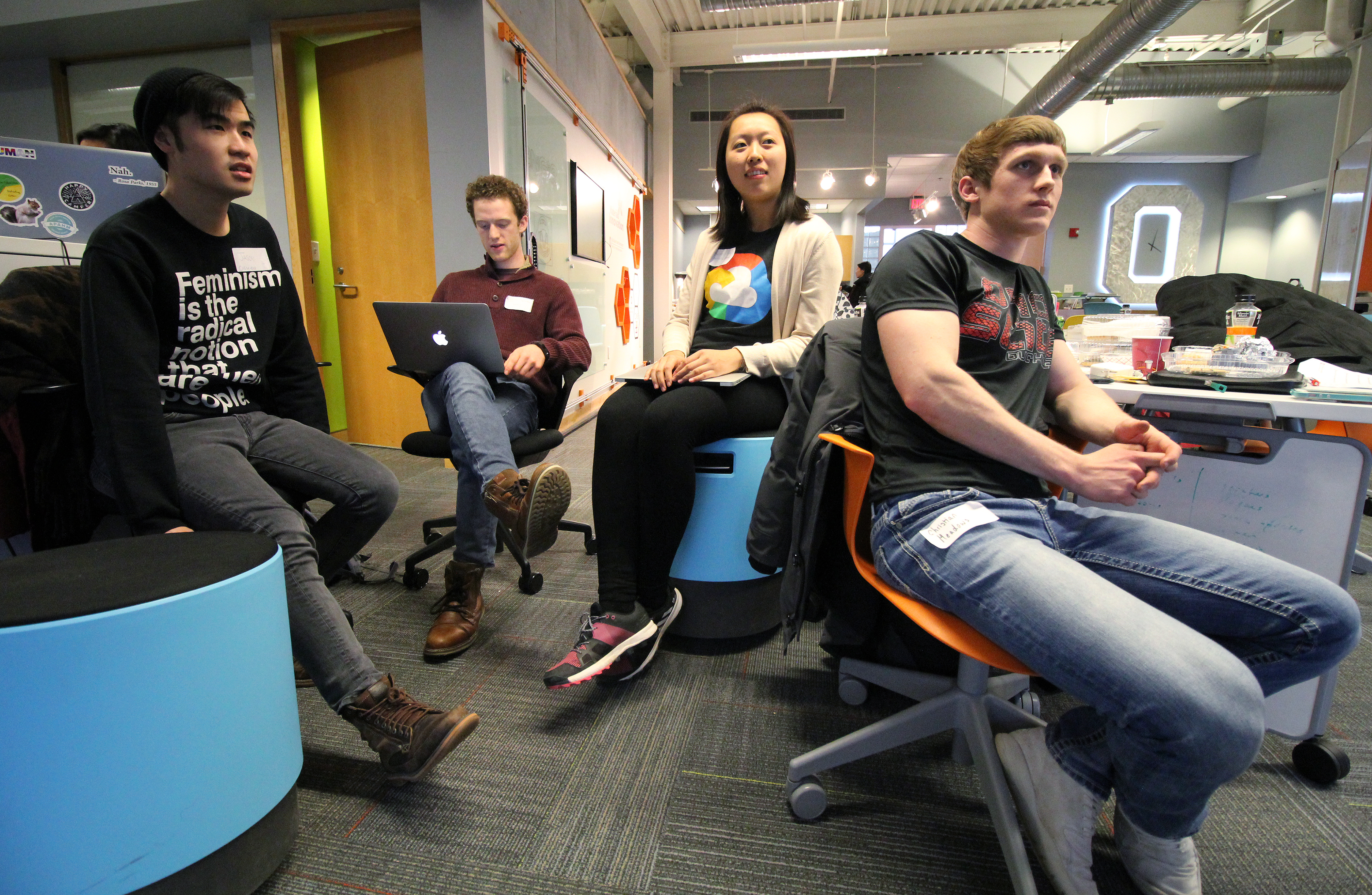 During the latest INNOVATE-O-thon event, nearly 50 undergraduate students from varying disciplines came together, from Feb. 9 to 11 at the Institute for Materials Research (IMR) Innovation Lab on Kinnear Road, to work with representatives from ENGIE and IMR.

There, students formed strategies aimed to inspire fellow classmates to alter their energy consumption habits and, in turn, improve energy efficiency at the Columbus campus.

IMR hosted the three-day externship program in collaboration with Ohio State’s Center for Innovation and Entrepreneurship.

Throughout the course of the event, students developed a myriad of concepts that were ultimately pitched to ENGIE, including mobile app and technology-based engagement efforts, education and training programs, awareness campaigns and cross-campus partnerships.

“I am really glad that ENGIE reached out to students to help with this,” said winning-group member Lauren Trapani, a second-year student in environment, economy, development and sustainability. “We know what is feasible to change in our behavior, and what is infeasible.” 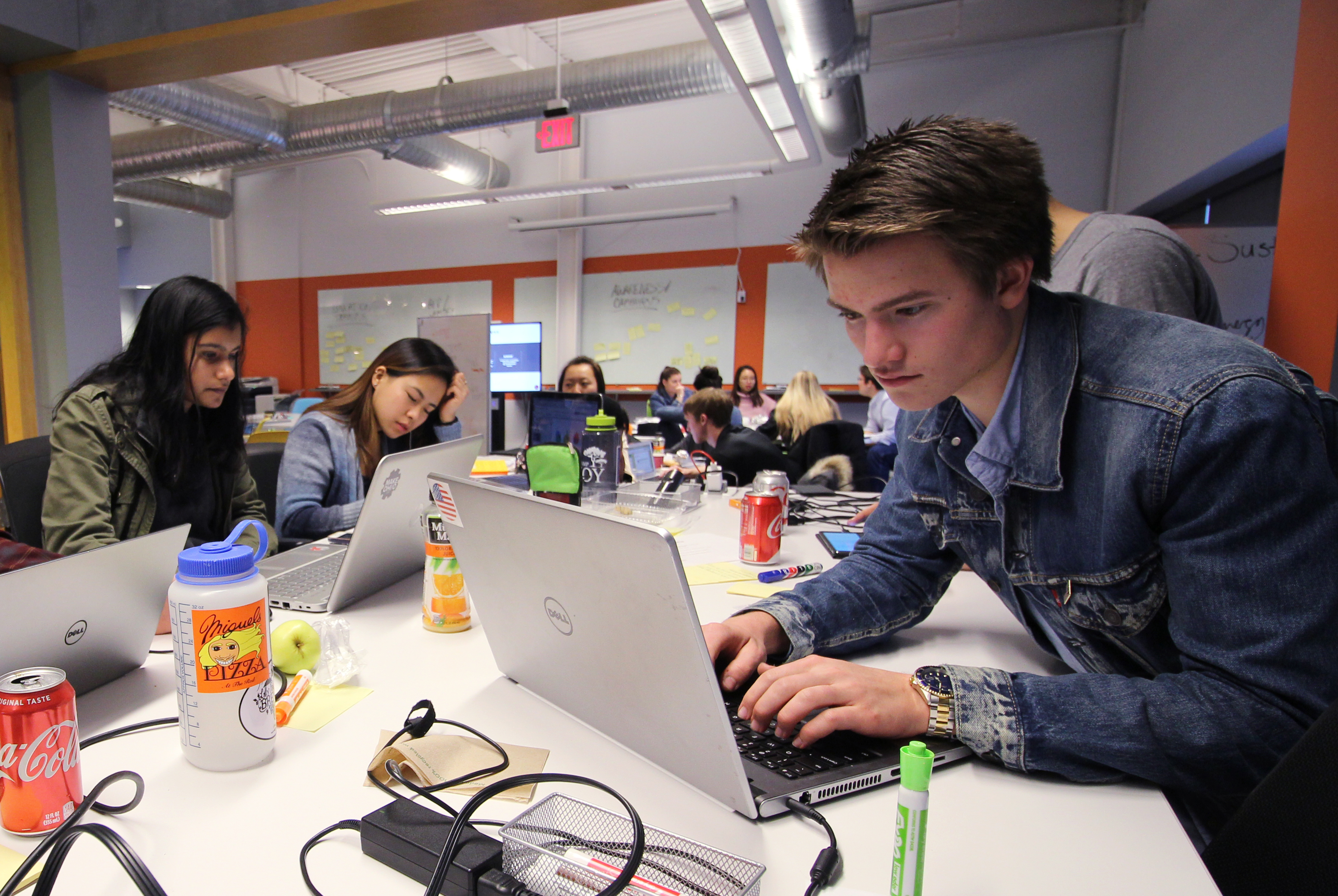 Judges looked to award ideas focused on academic collaboration, learning potential for the students, revealing the largest potential energy savings, greatest return on investment for implementation, and the highest probability of success with measurable and sustainable results.

Details about the winning concept and its implementation will be unveiled later this year.

On July 6, 2017, the university transferred the operating and maintaining responsibilities of the central utility systems that heat, cool, and power the Columbus campus to Ohio State Energy Partners (OSEP). OSEP is a 50-50 joint venture between Axium Infrastructure and ENGIE.

The 50-year partnership includes a $1.015 billion upfront payment to the university, with an additional $150 million committed to academic collaboration. Those commitments include a $25 million endowment for student scholarships, as well as $5 million devoted toward at least 500 internships in the coming half-century.

Student engagement is an integral step in achieving one of the partnership’s major goals to improve energy efficiency at the Columbus campus by a minimum of 25 percent in 10 years. About 13,700 undergraduate students live on campus this academic year, and they are in a position to have a real impact on future energy consumption on campus, said Serdar Tufekci, CEO of Ohio State Energy Partners.

“They are the ones who are living and spending most of their time on campus, so they know it much more than any of us could,” Tufekci said. “I feel they are much more passionate about sustainability than, say, my generation was. That passion carries to how they think and how they feel, and that comes out when they are involved in an activity.”

IMR held a series of brainstorming sessions in January with students and ENGIE representatives in preparation for the INNOVATE-O-thon in February. There, students honed their innovation themes, ensuring they could hit the ground running and maximize time refining the ideas with IMR staff, ENGIE team members and Ohio State faculty volunteers.

“I think it shows that ENGIE cares and, obviously, is willing to work with students, which is good. It shows they realize students have a big influence, and that students are the ones using this energy,” said finance major Austin Drabik-Weingard. “And it shows students also care, because the students that came to the program wanted to help and had all these great ideas.”

Stepping back to look at the big picture, nearly 60 percent of electricity in Ohio comes from coal generation, according to the U.S. Energy Information Administration. About 2 percent of the state’s energy is generated from renewable sources.

Ohio State can play a major role in improving energy efficiency across the state, with nearly 60,000 students spending substantial portions of their days on a campus spanning more than 1,600 acres.

“By reducing our consumption with no reduction in our quality of life, we will have a direct and real impact on how much carbon is put into the atmosphere in the state of Ohio,” Tufekci said.