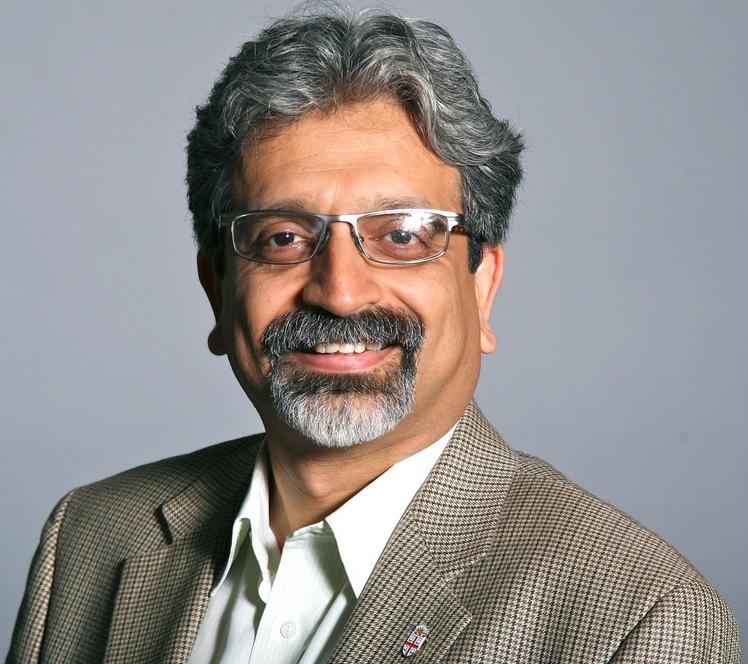 The Institute for Materials Research (IMR) has decided to postpone the autumn 2020 event in our ongoing Distinguished Lecture Series. This decision was made out of concern for the health and safety of our invited speaker, attendees and the greater community, as well as in consideration of the event’s strong track record of success, as an opportunity for face-to-face discussion and in-person networking.

We look forward to hosting Prof. Nitin P. Padture at The Ohio State University in the future. Padture is the Otis E. Randall University Professor in the School of Engineering and Director of the Institute for Molecular and Nanoscale Innovation at Brown University. He was expected this fall to discuss “The Fascinating Materials Science of Halide-Perovskite Thin Films for Next-Generation Solar Cells.”

Padture joined Brown University in 2012, after a career at Ohio State, where he was a College of Engineering Distinguished Professor and founding director of the Center for Emergent Materials CEM), which recently received funding Materials Research Science and Engineering Center (MRSEC) funding from the National Science Foundation (NSF) for the third time since 2008. Visit the CEM website for more information about the new six-year, $18 million grant.

Padture’s full bio and abstract for his talk “The Fascinating Materials Science of Halide-Perovskite Thin Films for Next-Generation Solar Cells” can be found below.

Nitin P. Padture is the Otis E. Randall University Professor in the School of Engineering, and Director of Institute for Molecular and Nanoscale Innovation (IMNI), at Brown University. Prior to January 2012, he was College of Engineering Distinguished Professor at OSU, and also founding Director of OSU’s Center for Emergent Materials (CEM) — an NSF Materials Research Science & Engineering Center (MRSEC). Padture’s research and teaching interests are in the broad areas of synthesis/processing, characterization, and properties/performance of advanced ceramics and nanomaterials used in applications ranging from jet engines to solar cells. He has 230 publications to his credit, which have been widely cited (h-index 74), and he has presented over 240 invited/keynote/plenary talks in the US and abroad. A Fellow of the American Ceramic Society, Padture has received that society’s Roland B. Snow, Robert L. Coble, and Richard M. Fulrath awards. He is also a recipient of the U.S. Office of Naval Research Young Investigator Award, and is a Fellow of the American Association for the Advancement of Science. Recently, he was honored by his undergraduate alma mater, Indian Institute of Technology (Bombay), with the Distinguished Alumnus Award. Padture is Editor of two top journals in the field of materials science and engineering: Acta Materialia and Scripta Materialia.

Thin-film perovskite solar cells (PSCs), whose record efficiency has rocketed from under 4% to over 25% (comparable to silicon solar cells) in just ten years, offer unprecedented promise of low-cost, high-efficiency renewable power generation. Organic-inorganic halide perovskite (OIHP) materials at the heart of PSCs have unique crystal structures, which entail rotating organic cations inside inorganic cages, imparting them with desirable optical and electronic properties. To exploit these properties for PSCs application, the reliable deposition of high-quality OIHP thin films over large areas is critically important. The microstructures and grain-boundary networks in the resulting polycrystalline OIHP thin films are equally important as they control the PSC performance and stability. Fundamental phenomena pertaining to synthesis, crystallization, coarsening, microstructural evolution, and grain-boundary functionalization involved in the processing of OIHP thin films for PSCs will be discussed with specific examples. In addition, the unique mechanical behavior of OIHPs, and its implication on the reliability of PSCs, will be discussed. The overall goal of our research is to have deterministic control over the scalable processing of tailored OIHP thin films with desired compositions, phases, microstructures, and grain-boundary networks for efficient, stable, and reliable PSCs of the future.