Prof. Ezekiel Johnston-Halperin is new to Ohio State, having joined the Condensed Matter Experiment group within the Department of Physics in July of 2006. Previous to arriving at OSU he received his graduate training in physics at the University of California at Santa Barbara in the lab of Prof. David Awschalom and worked as a post-doctoral researcher at the California Institute of Technology in the lab of Prof. James Heath in the Division of Chemistry and Chemical Engineering.

Dr. Johnston-Halperin’s research history covers a broad range of topics in spin-based and nanoscale science and technology, including:

Figure 1 (below) shows how the ability to fabricate extremely dense crossbar arrays coupled with the use of bistable molecular materials with scale-invariant functionality enables the fabrication of electronically addressable memory circuits at densities comparable to or better than the latest magnetic memory technologies.

A second example can be found in Figure 2 (below): due to its weak spin orbit coupling, GaN exhibits spin coherence times comparable to the highest quality GaAs epilayers, with significant coherence present even at room temperature. This result has significant implications for the design of functional spintronic circuits as well as in the pursuit of solid-state based quantum computing.

Since arriving at OSU, Prof. Johnston-Halperin has begun an interdisciplinary and collaborative research effort aimed at both the development of functional nanostructured materials as well as exploring ways to integrate spin-based functionality into nanoscale devices. Prof. Johnston-Halperin’s research group currently consists of two graduate student researchers (Sarah Parks and Lei Fang, both from the Department of Physics), and is still in the process of expanding. Current and pending research projects include:

More information and recent results can be found on the Johnston-Halperin group website. 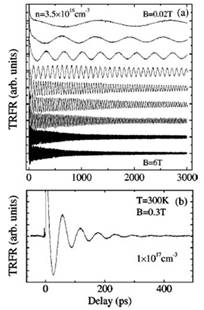