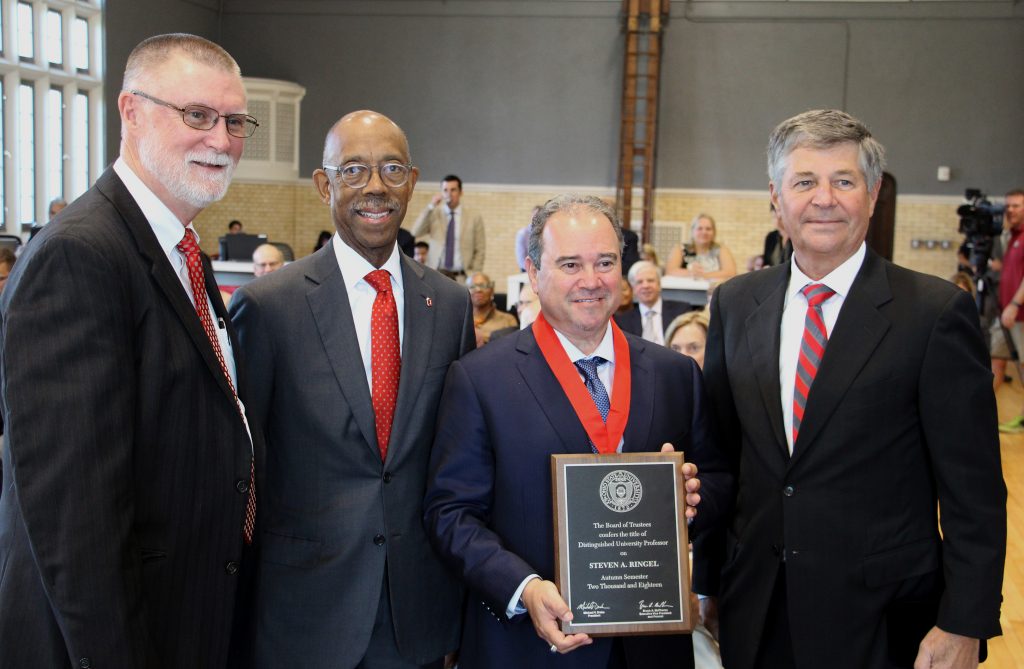 The Ohio State University awarded Steven Ringel, a faculty member in Electrical and Computer Engineering (ECE), the permanent title of Distinguished University Professor in appreciation of his teaching, research and service at the university.

Ohio State Board of Trustees conferred the appointment during its Aug. 31 meeting, bestowing Ringel the university’s highest honor given to faculty members.

“It is really such an honor to receive this recognition,” Ringel said. “I am, indeed, humbled.”

Ringel serves as professor and Neal A. Smith Chair in Electrical Engineering in the College of Engineering, Associate Vice President for Research, and Executive Director of the Institute for Materials Research (IMR).

The Office of Academic Affairs revealed the award to Ringel on April 9, during a surprise presentation in Dreese Laboratories. Ohio State has conferred the honor to only 58 awardees in its history.

“Dr. Steven Ringel is known as a visible, national and international leader of electronic materials and devices and, every year, has continued to contribute to the field, even throughout his growing leadership roles, here, at Ohio State,” Executive vice president and provost Bruce McPheron said at the trustees meeting. “In addition, he studies global innovation and translational research between academia and industry. And he has played an important role in building larger, cross-cutting communities in the university, considered important elements of university evolution and competitiveness.”

Ringel was accompanied at the Board of Trustees meeting in the historic, former gymnasium of the recently renovated Pomerene Hall by colleagues and family, including his brother Matt, sons Brett and Seth, and wife Geneva.

Speaking to Board of Trustees members, RIngel thanked the more than 100 graduate students and postdoctoral researchers he mentored throughout his career. He also thanked the departments of Electrical and Computer Engineering, Materials Science and Engineering, and Physics, as well as the collaborative cultures found within the Office of Research and colleges of Engineering and Arts and Sciences.

The culture fostered by leadership at Ohio State makes it easy to find meaningful collaborations and friendships with faculty and staff across the university, he said. 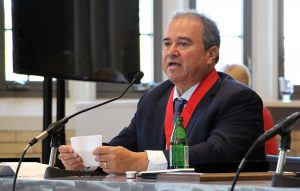 Ringel spoke at length about his primary application direction of his semiconductor research: solar energy, as well as how advances in solar technologies are benefited by sustained, interdisciplinary research and innovation, both of which he feels are strongly supported by the university.

He is the author or co-author of more than 150 journal articles. He has participated in more than 260 conference proceedings and presentations, and was invited to speak at about 150 lectures and colloquia at international conferences and professional organization throughout North America, Europe and Asia. He served as an editor of three books, was invited to contribute to four book chapters, and has filed three patents, with two issued.

With the permanent award, Ringel earns a one-time, $30,000 grant to support his academic work as he maintains his regular program of teaching, scholarly work and research. Like previous awardees, he becomes a member of the President’s and Provost’s Advisory Committee.

Ringel was previously named a 2015 Ohio State Distinguished Scholar. That award recognized his scholarly work in wide bandgap semiconductors and photovoltaics, as well as his leadership roles at IMR and as the Principal Investigator of the Materials and Manufacturing for Sustainability focus area of the Discovery Themes Initiative.

The university also conferred the Distinguished University Professor title to Barbara Anderson, a professor in the Department of Psychology with a joint appointment in Obstetrics and Gynecology.