Prof. Wolfgang Windl joined the department of Materials Science and Engineering at The Ohio State University as an Associate Professor in October 2001.  Prof. Windl’s work focuses on the area of nanoscale computational materials science. He previously held postdoctoral positions at Los Alamos National Laboratory and Arizona State University, and was a Principal Staff Scientist at Motorola’s Digital DNA Laboratories. He received the 2004 Nanotechnology Industrial Impact Award from the Nano Science and Technology Institute for the discovery of atomically sharp “perfect” interfaces in Si:Ge devices (with Prof. Gerd Duscher) and in 2006 he was the first recipient of the Fraunhofer-Bessel Research Award, jointly awarded from the Fraunhofer Society and Humboldt Foundation in Germany. His teaching at OSU was recognized by a 2006 Mars Fontana Best Teacher Award from the Department of Materials Science and Engineering.

Prof. Windl’s research focuses on the field of computational materials, chiefly on simulations of atomic-level structures and their properties. Since modeling methods on the atomic level are rather universal, independent of what kind of material the atoms form, the materials systems that his group studies span a wide range. Current projects examine the deformation behavior of amorphous metals (so-called “bulk metallic glasses”); the effect of irradiation on silicon carbide materials and fiberoptic cables in a nuclear environment; half-metallic double perovskites; and spin-lifetimes and carrier mobilities in spintronics materials. Since atomic-level simulations can only predict realistic behavior of materials if they are performed for a sensible, realistic arrangement of atoms, Prof. Windl works primarily on team projects in collaboration with experimental groups that help with the definition of the modeling tasks and their validation.

Professor Windl notes that his research group benefits immensely from the vast array of atomic-level characterization methods available at OSU, from the Campus Electron Optics Facility, where top-of-the-line atomic-resolution electron microscopy is available, to surface techniques available in the Physics department, to detailed electronic-structure measurement methods available in the Electrical and Computer Engineering department. State-of-the-art processing methods in various OSU departments and at Nanotech West Laboratory, as well as testing and irradiation facilities such as the OSU Nuclear Reactor Laboratory allow the group to prepare materials samples and study their changes in various environments. The availability of large amounts of computer time at the Ohio Supercomputer Center allows tackling demanding computations – which is usually the case for simulations on “real” materials. In addition, the bundling of expertise within the IMR and most recently in large-scale projects such as the Center for Emergent Materials, an NSF MRSEC at Ohio State, facilitate collaborations across departmental and college boundaries and make OSU a great place for atomistic modeling.

Computational materials modeling is often an economic way to investigate if a material is the right choice for an application before a time consuming and expensive series of experimental investigations is started. In the following, two examples are given with opposite outcomes – first, subsequent, successful experimental proof  through simulations indicate that a new method for fabrication of graphene-based devices based on “stamping” should work, while the second one shows that the use of amorphous silicon, which would be a much cheaper substrate for semiconductor applications than the common (single-)crystalline silicon, seems to be limited to applications that only require low doping levels (equivalent to small carrier concentrations). 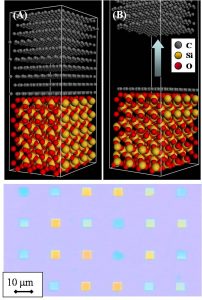 Fig. 1. Graphene stamping: Structures optimized by atomistic first-principles modeling for (A) a graphite crystal in contact with the (0001) plane of an oxygen-terminated quartz SiO2 crystal; (B) graphite crystal removed, leaving one graphene sheet stamped on quartz SiO2. The separation energy for (B) is calculated to be 60 mJ/m2, only one third of the bulk separation energy (180 mJ/m2) and much smaller than the 570 mJ/m2 for interface separation, which will enable graphene stamping. (C) Optical micrograph of a large area of a stamped few-layer graphite pattern on SiO2. Different colors indicate different heights of the stamped FLG. [D. Li, W. Windl, and N. P. Padture, Towards Site-Specific Stamping of Graphene, Adv. Mater. 21, 1243-46 (2009).

While scientists have known of graphene for many years, electronics industry officials became particularly excited about the potential use of graphene about five years ago, when it was discovered that graphene has a number of special properties. Researchers found that thin layers of graphite – the dark gray carbon material that fills most pencils – is highly stable, visible under the right conditions even when only one atom thick, stronger than steel and conducts electricity quickly and in exceptional ways.

While several researchers have been able to deposit small samples of graphene on a base material, Prof. Windl and his colleague Prof. Nitin Padture, Materials Science and Engineering department, wanted to develop a method to produce very accurate, very position-specific graphene patterns that industry partners could use to manufacture computer chips from this novel material. To do this, the OSU team etched their graphite samples to create numerous miniature “pillars” that then would be lightly pressed on a base material or “substrate.” When the graphite was pulled away, they theorized, the silicon dioxide substrate would adhere to the graphite, forcing a very thin top layer to shear off from the pillars. Indeed, theoretical calculations in Prof. Windl’s group showed that graphite should cleave under the right circumstances very close to the interface to the substrate, leaving one atomic layer of graphene behind. Experiments performed in Padture’s group found that indeed the principle of the stamping process worked, but additional optimization work on the stamping process and substrate are necessary. This  is currently being further examined in collaboration with Prof. Siddharth Rajan’s group from OSU’s Electrical and Computer Engineering department. The researchers have also filed a patent application for the stamping process together with Postdoctoral Researcher Dongshen Li.

The possibility of doping amorphous silicon and hydrogenated amorphous silicon in combination with their lower production cost, with respect to crystalline Si, have made them materials of choice for many different applications in optoelectronics and photovoltaics. Nevertheless, these materials have an unexpected low doping efficiency, which limits their use in device applications. In order to study whether this problem is of a fundamental nature or could be overcome, Prof. Windl and collaborators examined the origin of the low dopant efficiency by electronic structure modeling. 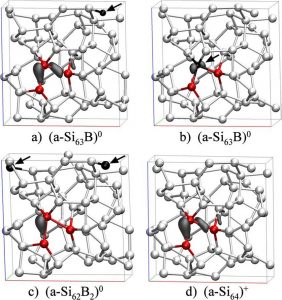 Figure 2. Hole spatial localization in 64-atom cells with (a) a B atom far from the hole trap region, (b) a B atom at the hole trap, and (c) two B atoms far from the hole trap, (d) as well as in a positively charged undoped cell. The dark shadowed areas show the isosurface at 50% of the maximum hole density. B atoms are black and marked by arrows. Si atoms are white and red. The red Si atoms indicate the position of the hole trap. [I. Santos, P. Castrillo, W. Windl, D. A. Drabold, L. Pelaz, and L. A. Marqués, Self-trapping in B-doped amorphous Si: Intrinsic origin of low acceptor efficiency, Phys. Rev. B 81, 033203 (2010).

Doping in amorphous materials poses various interesting questions not encountered in crystals. In tetrahedral amorphous semiconductors, dopants have been proposed to become electrically active when they are in a fourfold configuration, known as substitutional doping, where they can provide the material with a carrier. However, structural relaxation effects in the amorphous matrix can be substantial after the incorporation of dopants. Thus, it is not obvious a priori whether they will end up in a doping-active configuration or not. In addition, experiments indicate that the majority of the excess carriers introduced by dopants do not occupy shallow tail states around the band edges in analogy to crystalline silicon but rather midgap states. Finally, it has also been found that the carrier mobility decreases while the activation energy for conduction grows when increasing the dopant concentration, findings that are characteristic of highly localized trapping states.

To answer these puzzling questions, Prof. Windl and collaborators used ab initio simulations to study the doping efficiency of amorphous semiconductors, in particular of B-doped amorphous silicon. Dr. Ivan Santos, a scientist from the Universidad de Valladolid in Spain visiting Prof. Windl’s group, performed much of this work using highly optimized structural models for amorphous silicon provided by a group at Ohio University led by Prof. David Drabold, a specialist for amorphous semiconductors. After inserting boron at a large number of possible sites in those models it was found that even in the optimum case of substitutional doping in dangling-bond free amorphous Si the holes provided by B atoms do not behave as free carriers. Instead, they are trapped into regions with locally distorted bond angles. Thus, the effective activation energy for hole conduction turns out to be the hole binding energy to these traps. In the case of high B concentration, the trap states move deeper in the gap and the binding energy and spatial localization of holes increase. In addition, B atoms have lower energies for shorter bond lengths, configurations favored in the vicinity of these traps. Figure 2 shows the location of the trap states with respect to the boron dopant atom for different configuration. Thus, the collaboration concluded that the low doping efficiency in the case of boron is an intrinsic property of amorphous silicon with significant, fundamental hurdles to overcome before it could find application in devices that require higher carrier densities.

For more information on Dr. Windl‘s research visit his web site, or e-mail at windl.1@osu.edu.